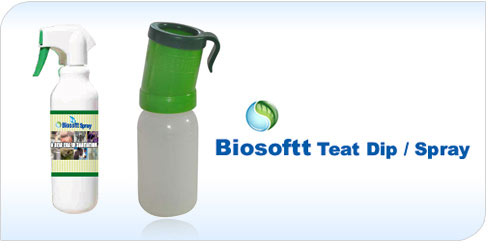 Biosoftt teat Dip and spray is a non-irritant

Dipping or spraying the teats immediately after milking has been practiced for many years.

The aim of post-milking dipping is to remove any contagious mastitis-causing pathogens that may have been deposited on the teat surface - including any present just inside the opened teat canal - that are transferred during milking from infected milk residues from inside the liner and clawpiece, before they have chance to colonise and infect the teat.

Cow teats are hygiene with Biosoftt (Teat Dip and Spray) solution, after each milking, or once a day for non-lactating cows. Hygiene with either a pure Biosoftt solution in water or with a Biosoftt based formulation. Biosoftt also kill bacteria present on any sores on the teats, promoting quicker healing.

For the best possible effect, it is important to dip or spray immediately after cluster unit removal, before the teat canal sphincter begins to close and before any bacteria have the opportunity to colonise and multiply.

In order to improve the overall result and minimize contamination risk, milking equipment is also hygiene with Biosoftt and the farmer should hygiene hands while handling cow by dipping them into a 1% Biosoftt solution.

Prevention and Control of Mastitis with Biosoftt